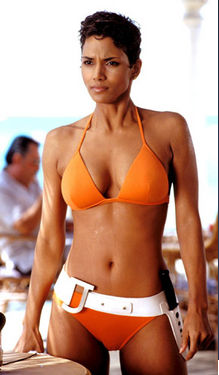 Giacinta "Jinx" Johnson is an NSA agent who joins with Bond to spy on Zao and look into his ties with Gustav Graves. She is portrayed by American actress Halle Berry.

In discussing her character, Berry said Jinx is "fashion-forward modern and the next step in the evolution of women in the Bond movies."[1]

The scene where she emerges from the ocean in a bikini paid homage to the character of Honey Ryder (Ursula Andress) from the first Bond film, Dr. No. Despite the bikini and location of Cuba in the film, the footage of the water and bar scene was shot in Cadiz and far from the warmth implied in the film; The location was reportedly very cold and windy, and footage has been released of Berry wrapped in thick towels in between takes to avoid catching a chill. [2]

According to an ITV news poll, Jinx has been voted the fourth toughest girl on screen of all time. Uma Thurman, the star of Quentin Tarantino`s samurai film Kill Bill was named as the winner. [3]

Speculation arose in 2003 of a spin-off film concentrating on the character which was scheduled for a November/December 2004 release. It was originally reported that MGM was keen to set up a franchise and to be a "winter olympics" alternative to 'James Bond,'. As early as the late 1990s, MGM had originally considered developing a spin-off film based on Michelle Yeoh's character, Wai Lin, in 1997's Tomorrow Never Dies. However, despite much speculation of an imminent movie, on October 26, 2003 , Variety reported that MGM had completely pulled the plug on this project, to the dismay of Barbara Broccoli and Michael Wilson of Eon Entertainment, who were reported to be "clearly furious" about the decision [4]. MGM were keen to move on with the next film instead. Jinx was also the first black Bond girl, hero or villain, in more than 17 years, since May Day (Grace Jones) in A View to a Kill, and the first black Bond Girl ever to play the heroine (principal Bond "good girl").

Retrieved from "https://bondgirls.fandom.com/wiki/Jynx?oldid=3953"
Community content is available under CC-BY-SA unless otherwise noted.