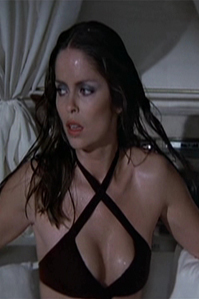 After the theft of a submarine, M recalls Bond from a mission where he is currently in a cabin located in Austria (in the novelisation, on the top of Aiguille du Mort, a mountain near the town of Chamonix). While leaving Bond is ambushed by a Russian team, but is able to kill one of them in self-defense prior to parachuting off the mountain. Unbeknownst to Bond, the agent he killed is Amasova's lover Sergei Barsov. She has also been recalled from a mission by General Gogol of the KGB.

Anya meets Bond during a show at the Pyramids in Egypt, where her thugs fight with Bond when she believes he has killed Fekkesh, an Egyptian contact. The real killer was Jaws.

However, they become formally introduced to one another in Cairo when they both arrive at Max Kalba's club. After spouting various biographical information to each other (for example, Anya is aware of Bond's doomed marriage), they attempt to outbid one another for a secret microfilm. When Kalba is killed by Jaws, they travel across Egypt tracking the microfilm. After Anya untimately outwits Bond for the microfilm (but Bond had reviewed it), they report to the Abu Simbel temple where Gogol and M have decided to work together to find out how and why their submarines are being stolen while at sea.

For most of the film Bond and Anya have the same mission objectives and try to achieve the same goals often by attempting to outdo one another, during which they fall in love. After travelling to Sardinia, Anya accompanies Bond to meet Karl Stromberg posing as his wife. Afterwards Anya learns that 007 killed her lover. She then tells Bond that she will ultimately have revenge once their mission is complete.

Anya is later captured by Stromberg and held captive at Atlantis, Stromberg's undersea base. Bond sneaks aboard and rescues her. As the mission reaches its end, she points her gun at Bond, only to discover that she is too in love with him to kill him.

Anya (pointing gun at Bond), tells him: "This mission is over, commander". But then she shoots the cork off of a champagne bottle.

When the escape pod with James and Anya goes into the ship Bond saved from Stromberg's 'instruments of Armageddon', Q, M, and Anya's superiors from Russia look inside a window at James and Anya making love in the luxury bed in awe. "James!" Anya says as she's the first one in the pod to see the duo's superiors.

It was planned to have Amasova make a cameo in Moonraker, as the woman in bed with General Gogol.

Retrieved from "https://bondgirls.fandom.com/wiki/Anya_Amasamo?oldid=3952"
Community content is available under CC-BY-SA unless otherwise noted.